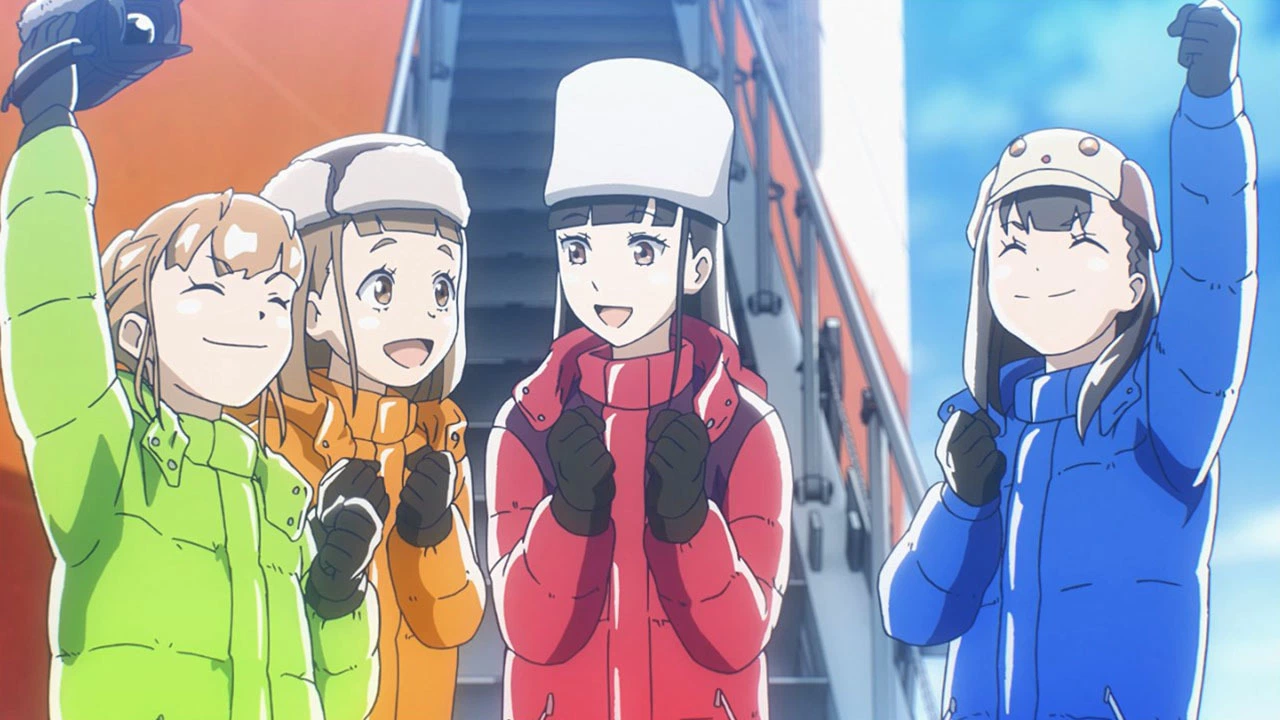 Late April 2018 was the time after a class trip to Bosnia, which was the last time I spent a night in a different country. I was searching for some Winter 2018 anime worth watching, which I haven’t seen as they were airing. Thanks to the positive feedback around it, I decided to watch Sora Yori.

I remember feeling like that was a really good decision. I was really glad not to miss out on this anime. It was a truly wonderful experience that amplified my already existing travelling urge to another level. As well as the wish to do so with people who would truly understand me and who I’d feel comfortable and happy around.

The pointless details of my memories go so far as remembering the exact type of candy I was eating while watching the series. They were strawberry pralines from a Croatian brand. How did I not think of getting those pralines for this year’s rewatch? Shame on me.

A cool thing from later that year is that I was on a festival where people talk about various different topics. One speaker was a Croatian person who literally did go to Antarctica, all the way to the south pole, all by himself. It was a no-brainer to go listen to that particular lecture, and it was for sure one of my highlights of the festival.

…and I already miss this series and I wish to just start a new rewatch because it fills my heart with joy. There really isn’t any anime out there quite like it, at least as much as I’m aware. I don’t think there’s any anime out there that would offer a similarly incredible experience related to travelling, coming of age, as well as the bonds/connections made along the travelling journey. But I did start Yuru Camp season 2 to help myself, which does feature the element of visiting places and relaxing at those places.

The post travelling depression and the post anime depression are similar in the sense that both happen after returning to the old, “normal” state, after spending time in places different to where you normally are, and with characters (or people) you aren’t normally around with. Although I guess the people part wouldn’t work if you’d go with someone more familiar, but yeah. In both cases you are on a journey. Obviously in a less physical sense in the case of anime, but you visit places you haven’t been to, spend time with characters/people, make memories, and connect yourself emotionally.

And then it all just ends, and you have to return to the usual life and the time you’ve spent during this limited period at this different place becomes a treasured memory and experience you carry within your heart. In the case of Sora Yori, these two different pain types are literally merged into one, since it very much conveyed the feeling of travelling, almost like you’re travelling by proxy with the characters. So other than the usual pain after rewatching a masterpiece like Sora Yori, there is also the pain similar to the post travelling depression.

I’m going on a journey

What made me want to rewatch Sora Yori this year is the fact that I can happily say I’m going on a journey for a few days to Italy in May. To be exact, I’ll attend the Eurovision Song Contest in Turin. It wouldn’t be me if I wouldn’t try to find similarities/links between my life and an anime so let’s start.

In a way it’s relatable to Sora Yori because it will be a freeing experience, travelling internationally for the first time alone (with only one other person), without a class or tourism agency or anything like that. It’s the type of experience I’ve been very much longing for since even before the first time I watched the series, and now it’s finally close to happening.

Then there’s the doubters: ofcourse pretty much everyone doubted the characters in Sora Yori. My mom wasn’t happy at first, apparantly was pretty shocked when I first mentioned the idea in January. My dad, ofcourse, acted in his typical way, completely negatively. It’s just a few day trip to what is technically a neighbouring country, but I still had to go through things like that.

The characters in Sora Yori only really met some time before the trip. In my case it isn’t exactly like that, but I haven’t spent an insane amount of time in the past with the person I’m going with. They were at my former uni and we occasionally talked. The link between us is Eurovision, and since last year we’ve been silently talking about possibly going.

It’s “just” a song contest, but the road to that is harder than it seems. It ofcourse takes money. And actually attaining the tickets takes a fair bit of luck as well, since they were sold out very quickly. We didn’t even get the tickets for the main thing we were aiming for, aka the jury final show on Friday, because they were sold out by the time I got to the checkout process. But the feeling of still attaining the tickets, albeit slightly different ones than expected, wasn’t any less sweet and satisfying. I wanted to scream something out of happiness, and later on I literally couldn’t stop smiling while walking around the streets, cause my heart was filled with too much joy to contain myself.

Among the Things that make me happy: Sora Yori mo Tooi Basho, travelling. Those few days next month are poised to be wonderful, full of long time wishes being fulfilled. I can still hardly believe what is about to come. And with every passing day I’m getting closer.

To Hold Me Closer 😉