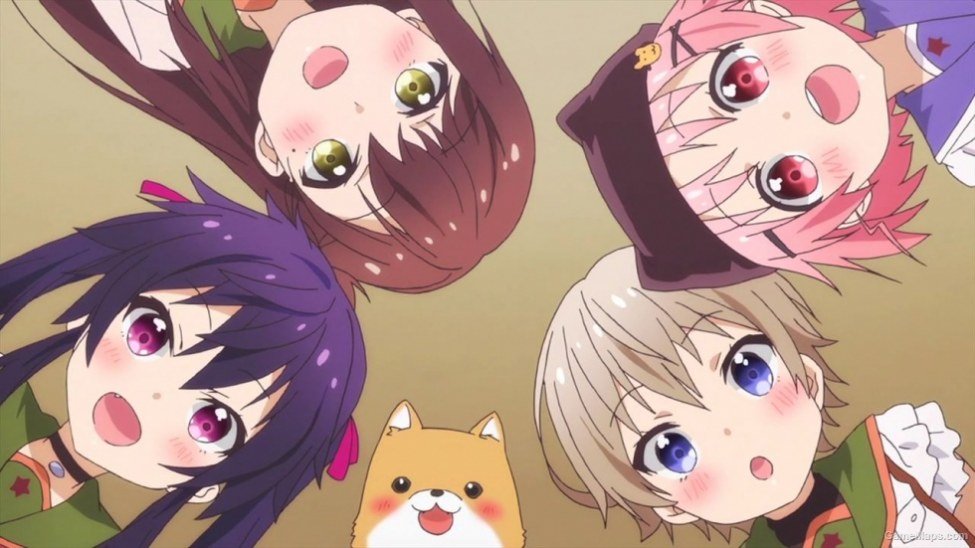 As the title suggests, I don’t watch a lot of horror anime, or any horror stuff really. Some anime I’ve completed that include the horror tag are Danganronpa, The Promised Neverland, Angels of Death, Boogiepop, but I’m not sure if any of those could be called a “hardcore” horror if that makes any sense. If anything, I’d call them mild in the horror aspect. By saying that I may be doing a slight disservice to The Promised Neverland, but my point is… There isn’t an extreme amount of gore… Mostly.

In fact, Attack on Titan isn’t listed as horror but I remember it having more gore and I remember being more terrified and disturbed than through the previously mentioned series. Actually, Attack on Titan may have had more gore than Gakkougurashi too. But anyway – I don’t have much experience in scary/disturbing/horror anime.

But I do have a lot of experience in cute, slice of life anime. And what I’ve witnessed in Gakkougurashi was a mix of both scary and cute stuff, completed with emotional moments towards the end.

I’ve actually started this anime cause I felt like watching another series where things start off cute but it turns out nothing is actually as it seems, and there is despair underneath. Examples of such series I’ve seen before and enjoyed are Madoka Magica (one of my all time favorites), Magical Girl Raising Project, Yuki Yuna is a Hero. Gakkougurashi does fit that description too. But somehow, it hit a bit differently for me.

If you’ve not seen Gakkougurashi yet, I highly suggest you not to read about it because the less you know, the better the experience is going to be. Take this as a spoiler alert for the rest of this post.

In my case, despite reading the synopsis and having an idea of what I’m getting into, things caught me off guard. It was in the presentation/narrative of the show. The first episode was basically a cute slice of life episode, until that ending. Judging by the way that first episode was unfolding, I was expecting the series would have a few episodes of the “normal school life”, and then we would be hit with the plot twist of humanity being turned into zombies for whatever reason, and the rest of the series would be the characters trying to live through it and perhaps by the end of the series finding out what exactly happened and why.

I mean two of the Lerche series I mentioned in this post, Danganronpa and Magical Girl Raising Project both kinda followed that formula. In both cases the first episodes saw the characters go from “normality” to the new situation and we followed them trying to adapt. Was it reasonable to expect Gakkougurashi follow a similar formula?

Apparantly not. The anime caught me off guard in the way it told the story. It kinda made no sense at first, why is the MC so cheerful when the world around her is kinda ruined? I was almost annoyed with her, thinking, come on would you get a grasp of the situation you are in? Is it really a time and place to be so happy?

It all started making sense as I moved on, especially through the middle episodes. The MC served as a glimmer of hope, a distraction from the unbelievable reality. You would truly go insane if you’d think about that kind of reality 100% of the time I guess.

The MC crafted a world in her head where everyone is still fine, even Sakura-sensei (if no one else will call her like that, let me be the first person to do so). Usually I never really think if the events I’m seeing are actually happening exactly in the way they are being shown. Usually I think the MC perspective is “correct” and what we’re seeing are the same events the other characters are seeing. Not in Gakkougurashi, and I thought that was brilliant. In hinsight it all made sense. Sakura-sensei being ignored by the others wasn’t just a simple recurring joke. Well played, Lerche.

Another brilliant aspect of Gakkougurashi that caught me by surprise was the opening sequence. Sure, I thought it was too cheerful for what’s actually going on. It felt like a “trap” opening, I never expected the story to actually reflect the mood of the opening.

But for some reason, having this kind of opening in a series like this just made the experience feel even more disturbing. At the halfway point of the series, I genuinely felt uncomfortable watching the MC’s cheerfulness in the opening. It’s hard to really put it into words, but I think it had to do with how the MC views the world in a different way. I guess I felt bad for how she got mentally disturbed to that point? Or it’s just the weird effect of a cheerful song in a not so cheerful situation? It’s probably a bit of both.

The opening has been changing gradually through the series to show how bad the situation is getting and even that kinda made me scared. Like, when the sky was getting red it was genuinely an “oh God OH GOD” moment. I knew things are about to get reeeally bad and I was bracing myself for it.

After Zombieland Saga, Gakkougurashi was my first anime featuring zombies. That aspect was relatively new to me. At the same time, the aspect of cute girls in a school setting was something I’m quite familiar with. Gakkougurashi was a mix of both, and that made for a unique watching experience. There were “fanservice” moments, moments when the characters relaxed and actually tried to enjoy the not so pleasant situation they were in. It kinda felt reckless, knowing that at any time something can go horribly wrong. At the same time it felt like something the characters needed and deserved to have from time to time.

In the end the way to make the zombies go away was simple. All it took was telling them to go home. But obviously, coming to that conclusion took a lot of hard work from the characters. They didn’t just have to overcome attacks on their lives, but in the case of the MC, they had to overcome their traumas/delusions as well.

There were emotional moments, the dog turned out to have a much more important role than expected. Taromaru’s death made me cry, not just because he was thankful to Miki in his final moment, but also because the death of a dog is something that happened to me very recently and the sadness is still fresh. (Love you, Ben)

The anime ended with unanswered questions that I can probably only find the answers to by reading the manga. What is the cause of the zombies? Biological weapons? Other people are obviously still alive, but where are they? Are they at the spot they were heading to at the end? How did the school know this could happen? Is there any way for things to return to normal? I’d watch a second season but it doesn’t seem likely to happen.