Rascal Does Not Dream of Bunny Girl Senpai is one of the most talked about anime of Fall 2018. It has an unusual premise, likable characters and perhaps a misleading title and key visual. More than enough things to grab the attention of the fanbase.

But what about the Opening and Ending sequences?

I’m here to break them down.

The Opening song has been made by the all-female Japanese bandÂ The Peggies, who previously made the first Ending song for Boruto: Naruto Next Generations.

The song is called “Kimi no Sei”. It has a lighthearted feel with a sense of urgency. I’m not sure if that makes any sense. But I feel the song fits the anime.

The sequence starts with our main character, Azusagawa Sakuta, running and almost tripping.

After which we see this still shot of him in the wind.

The title of the series comes up, and it is shown in a unique way. Well, unique for me at least. I haven’t yet seen this kind of title screen in anime.

Next we follow our main character from behind, before we are introduced to the side characters. 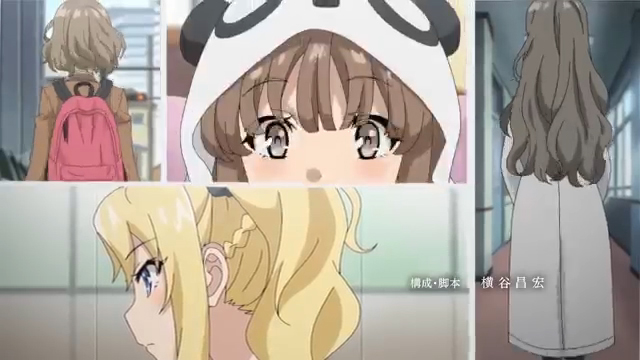 We see her walk in the identical spot as Sakuta from before. The difference is that she is walking towards us. The same transition to the side characters follows. 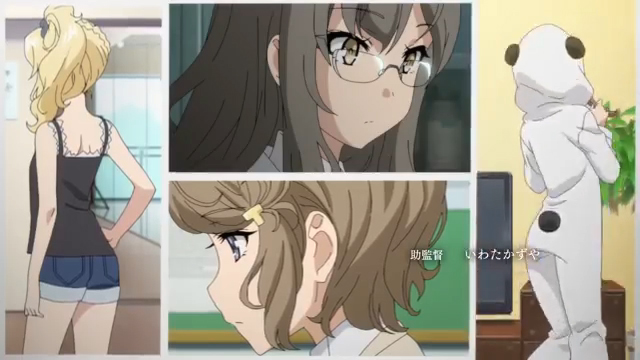 There is a glimpse of Mai dancing under the moonlight dressed as a bunny girl, before another shot of her at the beach.

She is then seen walking in school, presumably during dusk.

We are shown students that are, I assume, walking towards the school, and more of Mai on the beach, but this time with only her legs visible.

EDIT: I wrote that the girl on the beach and the girl in the school gif above is Mai, which is wrong. It’s actually Shoko, Sakuta’s first crush. The similar designs confused me. She is also the girl with the red umbrella I mentioned below. Thank you to Matt on Twitter for pointing it out!

Followed by Mai as a bunny girl under the moonlight, her arms surrounding the moon.

There are some fireworks, a shot of leafs and Sakuta punching the air…

…which brings us to Sakuta running once again, same place as the first shot of the sequence, but a different camera angle.

Another shot of Mai in school, after which we see Kaede, Sakuta’s sister, holding cats. Dogs are better, but I’ll let this one slide.

This leads us into another few shots of the side characters.

Sakuta is then seen out of energy and falling on his knees during a rainy night.

A girl is walking somewhere with a red umbrella. But not while it’s raining. She is the only one with an umbrella. It looks like a clear day.

A shot of a puddle is what we see next. Not at all sure what this could mean. I guess some of the defining moments of this anime will be accompanied by rain.

This shot of the bunny girl senpai dancing is so cute. Probably my favorite moment of the entire sequence.

We follow Sakuta walking, he throws something in the sea…

…before we see the side characters again, until Mai kills us all.

Plot twist: she doesn’t, otherwise we wouldn’t be able to see this final shot of Sakuta which marks the end of the Opening sequence.

I’ll be focusing on the Sakurajima Mai version of the Ending, since she is one of the main characters after all.

The sequence is very simple. We see Mai walking on the beach, during the dusk, with a few closeups and changes of the camera angle.

When she turns around, she smiles.

The sequence ends with an aerial view of Mai and Sakuta.

Overall, the Opening does a fine job of presenting the characters. It has a few cute moments. The music has been integrated very well.

But that’s about it. The sequence doesn’t have any defining, memorable moments. There are no deep moments with hidden meanings you will understand only after finishing the show.

And that’s fine. As long as the Opening manages to put you in the mood for the show you are about to watch, it is doing its job well. At least in my opinion.

This Ending sequence seems to be emphasizing the solitude of Mai.

The song itself is beautiful, it has a melancholic feel, very fitting for the visuals.

It’s a simple Ending, but very effective at the same time.

What are your thoughts onÂ Rascal Does Not Dream of Bunny Girl Senpai so far? Do you like its Opening and Ending sequences?