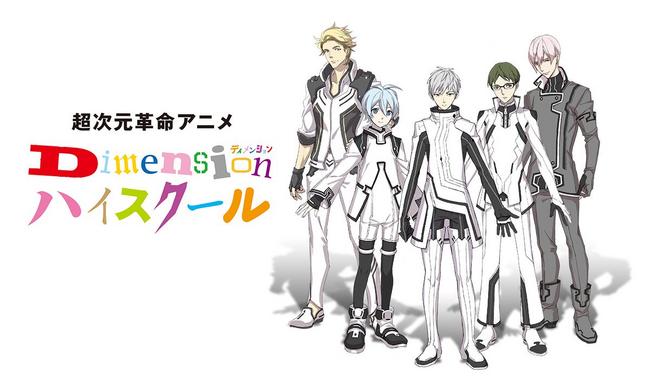 Sometimes when you look through the titles a new anime season is offering, you come across something that looks bad in every single aspect.

But it’s bad in such an unique way that you actually want to check it out.

This winter season, that kind of anime is Dimension High School for me.

You’ve thought the isekai genre has nothing new to offer? Well take a look at Dimension High School, the most realistically-looking isekai ever made.

On his way to cram school, Junpei Shiroyama notices a weird looking rock, and takes it with him to the classroom. Sitting in the classroom, his table suddenly starts shaking.

What could cause such a strange thing to happen? It turns out it was the rock, which later started floating, grabbing the attention of Shiroyama’s classmates and teacher.

Then the rock started talking as well, until Shiroyama had enough of it and he threw the rock away, thinking it was some kind of a prank.

But it wasn’t. The rock returned, furious with what Shiroyama had done. The next thing Shiroyama and his friends knew was that they were summoned into an anime world.

This anime world is in danger, with only the area of the classroom being safe. The summoned Shiroyama and his friends are the only hope that remains for the world.

Their way out is by solving puzzles set by a Sphinx that has appeared. After failing the first question, their teacher gets “eaten”.

However, Shiroyama shows his cool and does well to get the second question right, returning the group to the real world. As they all try to explain what just happened, the rock reappears and makes them know of Sphinxs’s rule – if he eats you and you get revived, you will lose the one thing most precious to you.

It turns out that for Momoya-sensei, his hard-earned money is his most precious thing.

I’m gonna be honest here, I laughed through this entire thing, which I believe was the intention.

The concept of a live action anime hybrid is actually a really unique and interesting one. But the way this one was executed is nothing other than laughable.

Already from the tone of the first scene it was clear to me that this should not be taken seriously.

I have to say I don’t have much experience with asian TV dramas or live action, but I thought the acting parts were more than solid. The same could be said for the dubbed parts. The actors did well considering their lack of experience.

What can I even say on the animation quality? Some have described it as RWBY volume 1 quality, and I can totally see why. Altrough this was even worse than that. The characters could literally put their arms through their bodies, which was used as part of the narrative.

The OST was average, but it made the supposedly dramatic scenes funnier. The opening song is good, but the ending song is actually awesome. I want a full version as soon as possible.

All in all, this was pretty much what I expected. It’s a series that should not be taken seriously, and should be watched ironically for the best experience. Stay away if you want actual good quality.

I’m gonna stay to see how bad it can get.

If you’ve also seen Dimension High School episode 1, please let me know your thoughts on it in the comments!