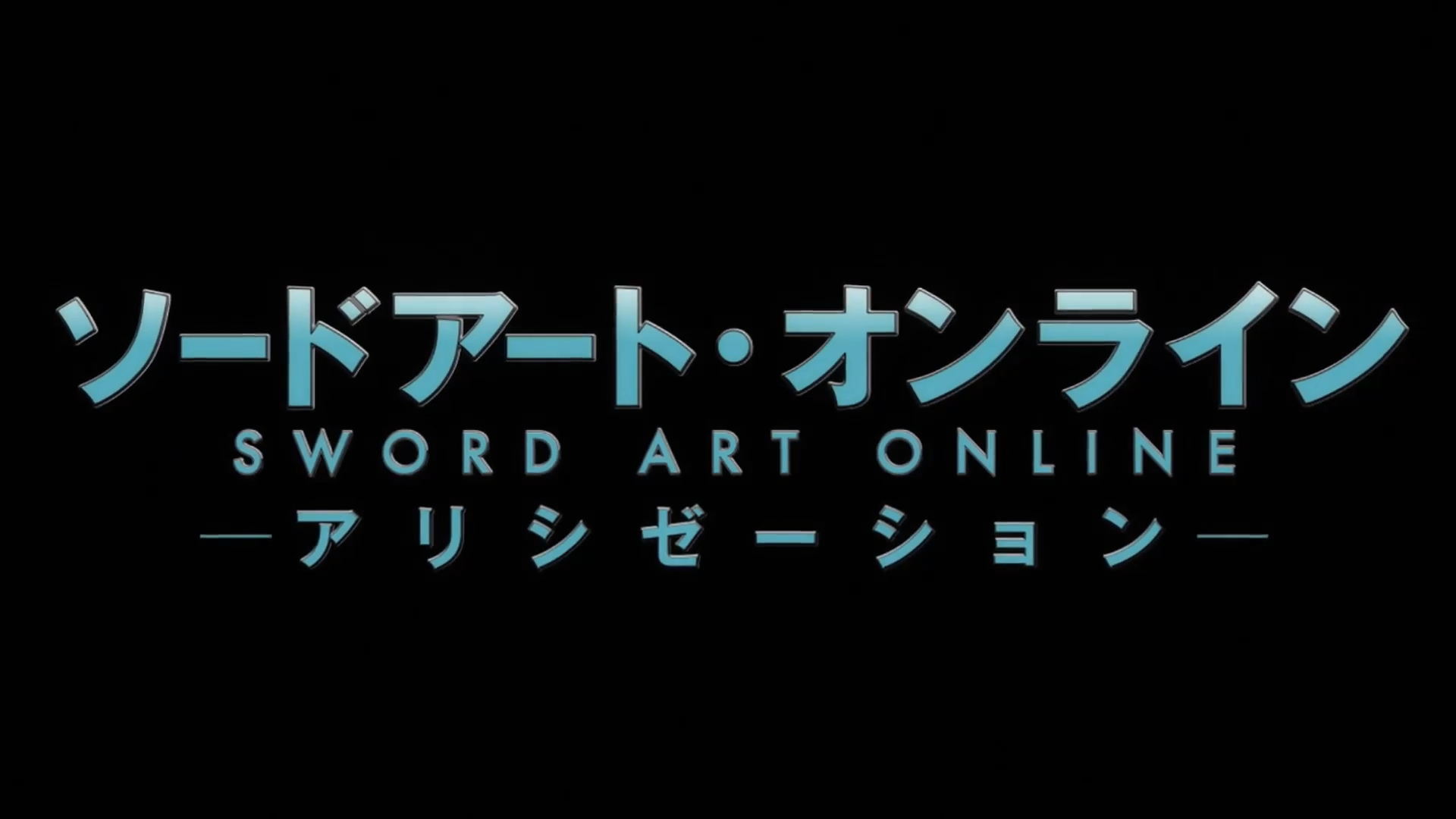 Last Saturday’s Sword Art Online: Alicization episode was the final one that had ADAMAS and Iris as its opening and ending sequences.

ADAMAS truly did its job well, and I’m sad to see it go. But Sword Art Online has never failed to provide us with great openings and endings, and I’m far from disapointed with the new sequences we have.

The new opening song, called Resister, is performed by ASCA, whose previous works include the Sakurasou no Pet na Kanojo ending 2.

With that said, it’s time for me to break down the visuals of the new opening sequence.

We start off with our two main characters in a synchronization similar to the one from the first opening.

The synchronization from the first opening had those glowing swords and for that reason I prefer it to the new version.

We then focus on Kirito and his eye, and the blue particles form the logo. It’s interesting to note how the anime logo is blue on a black background. The same was the case in the first ever opening of SAO.

Eugeo is opening his eyes, as we watch some of his flashbacks and him clenching his fist. I can’t help but get reminded of that moment from episode 10 when he first opened his eyes after having them reinstated.

Next he falls deep into water. This made me think of a similar moment from 3-gatsu no Lion’s first opening.

Eugeo is falling deep. Deep into his feelings of guilt for what happened to Alice?

Alice is shown in a similar way, with flashbacks from her childhood. Unlike Eugeo, she is closing her eyes. Another similarity to the first ever SAO opening is a silhouette version of Alice, just like Kirito and Asuna had back then.

I first thought this was the dragon that took Alice away. But still, that white bird flying away is a nice touch…

…and it makes for a great looking transition to Kirito and Eugeo.

They are aiming to reach the 100th floor of the cathedral. Definitely not the first time Kirito is climbing through floors…

And they are running…

…running towards the crimson integrity knight, the same one that took Alice into custody. The way Kirito dodges that fire attack is just too epic.

This is followed by some more cool looking fight scenes with both the crimson knight and a white-armored knight with a purple mantle.

Next up is this beautiful looking scene of Eugeo and Kirito getting ready for a fight. These gray tones are clearly a sign of some hardships that are about to come. But Kirito looks determined and confident in his abilities as ever.

The “administrator” is surrounded by some weapons as she arises from what looks like a pool of blood to me.

This is actually another moment that has reminded me of the first ever SAO opening. It made me think of this moment, when the whole scenery got sucked in. The opposite happens to the administrator.

Both scenes also share the same tone of colors.

Eugeo reaches out with his hand, and his Blue Rose sword is there with him.

Well I mentioned hardships… It seems there is a lot of pain to come for Kirito.

He screams as in the background there are blue roses surrounding Eugeo followed by a single blue rose getting filled with… blood?

I can’t determine exactly what she is sitting on, but it does look the closest to skulls…

Although what follows is a shot of some toys…

… then an unidentified girl…

…and another callback to SAO’s first ever opening sequence, a hand reaching towards the sky.

We briefly see Cardinal, and we get an extended version of the epic handshake from the first Alicization opening.

In this case more is better, so yeah I prefer the new version.

The sequence ends with another callback to the first ever SAO opening – two crossed swords.

First time watching the new opening, I was quick to say that I prefer the older one. But Sword Art Online always has songs that grow on you incredibly quickly, and it happened with Resister as well.

All I can say is that I don’t think anymore that one of the songs is clearly better.

Visually I probably prefer Resister. Needless to say, the animation quality is fantastic, but the small details are what makes this opening shine. I love all the references to Sword Art Online’s first opening sequence. I believe they are here due to the fact that Kirito once again has to reach the top floor of something.

I am both hyped but also prepared for a lot of hardships that are ahead. This opening perfectly hits the balance between those two things. I hope this made some kind of sense.

It looks like Kirito will have to struggle like never before. And SAO seems to be bolder than ever, not holding back with the violent aspects or blood, as shown in episode 10, and really in this opening sequence as well.

How did you like the new Sword Art Online: Alicization opening sequence? What about the ending sequence? Please let me know in the comments!