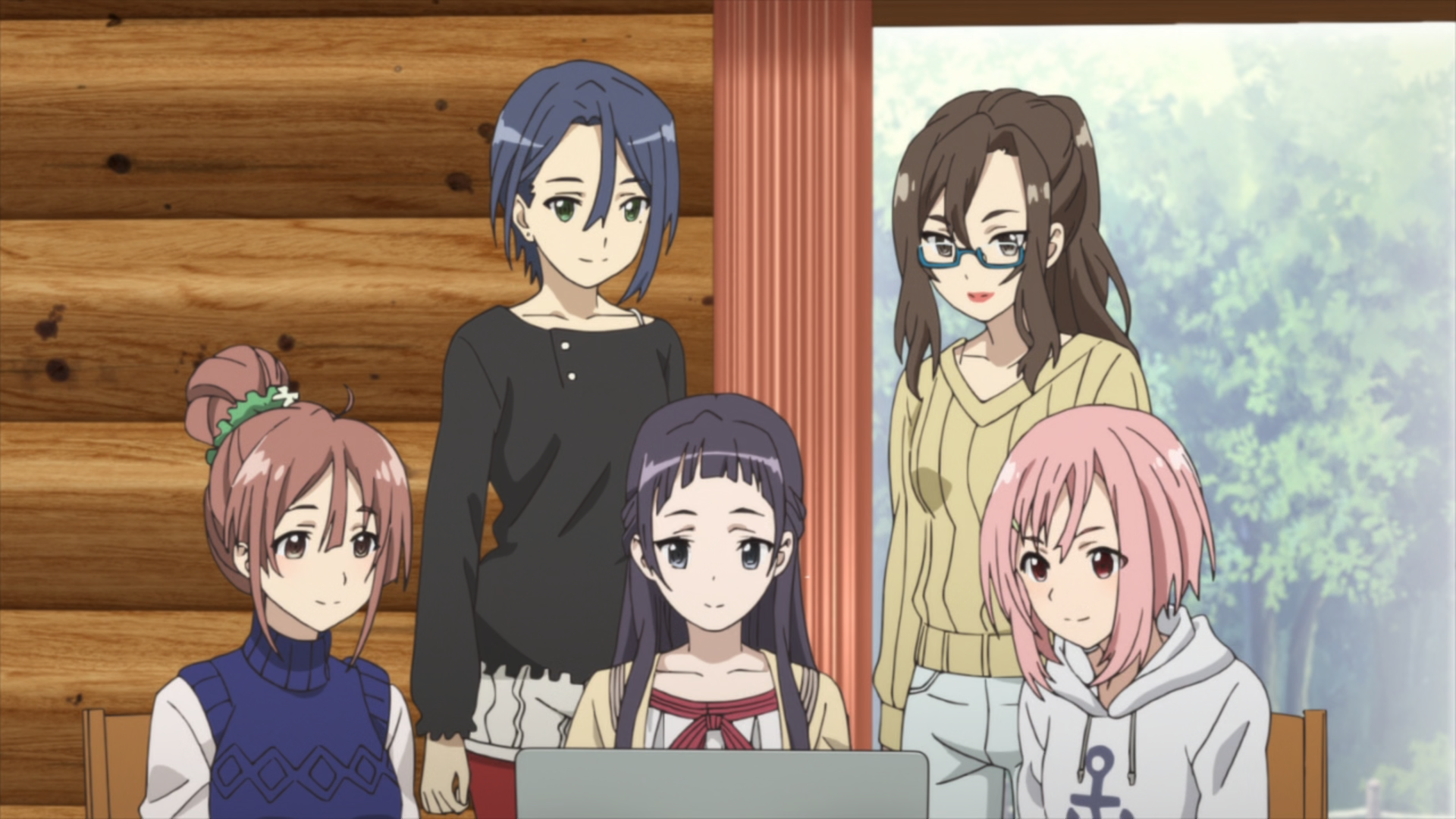 I first watched Sakura Quest around this time last year, started it around the end of March. Back then, it strongly resonated with me due to the rural setting and the main character Yoshino’s circumstances. She wanted to get away from a rural setting, and she believed a big city like Tokyo is the place to be. Then it turned out coming to Tokyo is one thing, but staying in Tokyo is more of a challenge than it may seem. And so, circumstances saw her once again end up in the rural setting that she wished to avoid. Her financial situation and lack of success at job searching left her without any other options to choose from.

This resonated so strongly with me, because I myself, moved from a city to a rural area. (Interestingly, Manoyama was said to have around the same population as my former city, but for Croatian standards, my former city is a well-established medium-sized city). And it was just a couple of months since, so it was still a fresh thing. Plus, I still had to visit the former city almost on a weekly basis due to driving lessons. It was hard not to get reminded that I moved, and I felt like it was a step backwards. I missed being in the former city.

It felt like it was all a compromise for whatever reason, and I was searching for that “reason” that would make moving here an “improvement”. Maybe Yoshino felt the same way at the start of her one year as the Chupakabura queen.

Accepting your circumstances and trying to make the best of them. “Home” can be anywhere, as long as you accept the surroundings and the people, and ofcourse, the people accept you. One year ago these were my main takeways from Sakura Quest. It truly made me start feeling more at ease with the moving.

A year later it’s definitely still an important message and takeway. But this time it doesn’t feel as prominent. Maybe it’s because I got much more used to not living in my former city?

Yoshino struggled so much with finding a job in Tokyo that in the end, she was forced to give up on staying there. (For a while, at least).

Sanae tried working in her field in Tokyo, but found that it was too stressful and felt like she wasn’t making a difference – that anyone could easily take her spot without many things changing.

Maki tried fulfilling her dream of being an actress in Tokyo, but returned to Manoyama when she realized that doing something professionally requires a lot more than just… Wanting to do it.

They all tried their luck in the big city only to find out it’s not so simple – they had to find different ways to support themselves. Which is where the important message comes in.

Even with dreams, and areas you are good at, it won’t necessarily work out. Which doesn’t mean you should give up either. You can incorporate your passions into your alternative job. Just as Maki still found ways to act on stage despite working on revitalizing Manoyama, and Sanae still used her web design/programming skills for the same objective. Even Ririko’s passion for UMAs ended up useful for that same objective.

I’ve realized that the whole “one true calling” narrative doesn’t actually work for me. I have at least 3 things I would call my passion, so why would you make me choose just one thing to do? I guess my point is, even if you can’t turn one of your passions into a living, you can always do it with something else.

And if you don’t have particular passions? I would say just go for whatever you can see yourself enjoy or be good at. You never know what job could end up having something that you enjoyed more than you perhaps expected. Or if nothing else, at least you can be skilled in various areas that could prove useful when you don’t really expect it. Just ask Maki.

By the end of Sakura Quest, Yoshino learned that you can bring a part of yourself to any job and make it more interesting. Similarly, Maki decided to bring something she likes to whatever job she’ll have. Sanae realized that each individual really can make a difference in some way. Ririko opened up and became determined to travel the world.

Ririko has a passion for unconventional things, but that doesn’t mean she should be shunned off as “weird”. Once you give people like Ririko a chance, you’ll realize they are much different and more fun to be around than it may seem, and no, they should not be forced to speak about more “normal” things. And yes, I wrote the last part of that sentence with a certain scene in mind…

What even is “normal” anyway? Screw that concept. Embrace the differences that people have and let them be themselves. Thank you for coming to my TED talk.

I didn’t actually write anything about Shiori yet. It wouldn’t be fair to leave her out. In terms of “relatable” aspects, I probably have the least with her, but I can be an airhead sometimes too. Or should I make that “all the time”?

Each of the five main Sakura Quest characters is a fair choice for “best girl” but I think I’m leaning towards Maki or Ririko.

To be honest, this is the most underrated anime I know of. It seems to have a bit of a reputation of being “boring” or people just never heard of it. It may just be me since I’m so used to slice of life anime, but I really don’t know what would make this “boring”. Maybe the setting or the type of issues the characters are facing? I don’t know. But in my opinion, there are so many things happening every episode I never once found myself bored. But tastes are a subjective thing.

P.A.WORKS shows are created with a mindset to leave a lasting impression to people and that can encourage people to look forward to tomorrow. We would like to keep on making shows that people can dream about a positive future story of themselves. We hope to make our shows not just a consumable entertainment but a show that becomes precious to the viewer and shed light to their path ahead.

And this is why P.A. Works is actually my favorite studio. With their slice-of-life they succeed in just that – they encourage me and leave a lasting impression. I think it’s a wonderful thing to strive for when making anime, and I’m grateful for their work.

I already miss Sakura Quest and I only finished rewatching it last night. Please give it a chance if you haven’t already.