Skip to content
Home » The Importance of Goals – Shirobako Review 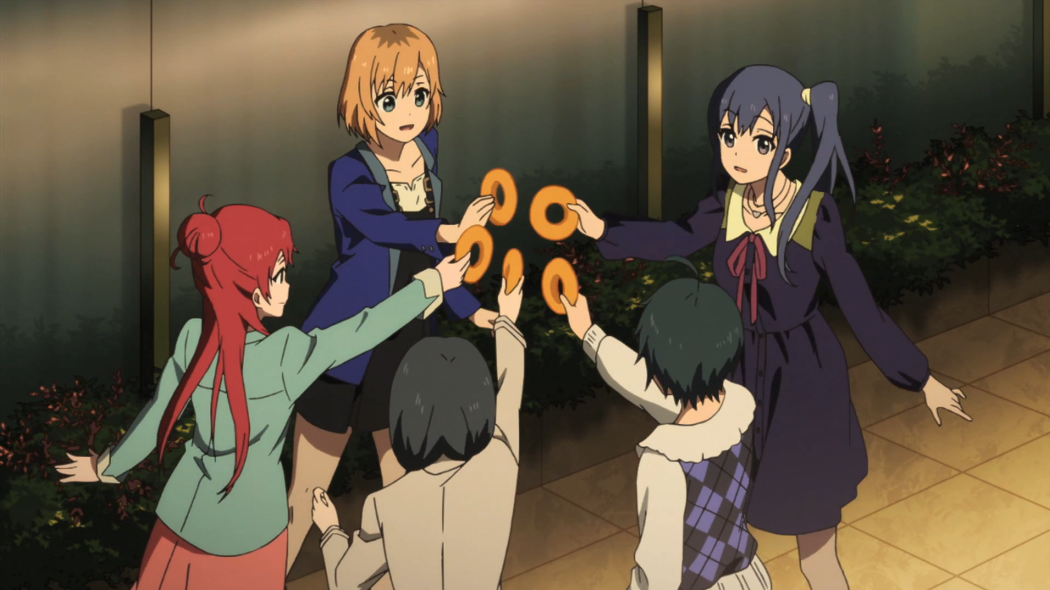 I’m just gonna get straight to the point here – Shirobako is a masterpiece. I’m sure for anyone that follows me on Twitter, its not a surprise that I’m saying this.

It’s an anime that tackles different topics like the anime industry, goals, motivations and interests in life, the hardships of the work environment. It has many different layers but manages to make all of it work so well.

With my own goals being working on a real anime opening/ending sequence, it’s an anime that really hits home for me and has that special meaning for me. Rewatching Shirobako after almost a year truly filled me with so much happiness, and once again worked wonders for my motivation.

You could say Shirobako is a story that follows five girls with a common goal and their paths towards reaching that goal. But at the same time, its a story about making a story – in anime form ofcourse.

I believe it gives a good general insight of the anime industry. It’s chaos. But quite a lovely chaos. Much better than the chaos of university exams, that’s for sure.

The chaos most often occurs when a member of the group isn’t able to fulfill their duties properly or on time. And the production staff, mainly Miyamori Aoi in Shirobako, has to find solutions. What doesn’t help either is when certain members of the group have a different attitude than everyone else, disrupting the work flow. These are the hardships of the work environment that I mentioned earlier. I guess it shows why job interviews are a thing. It’s much harder if people don’t have similar goals and attitudes.

And yet every person is different and has its own level of ability and pace of doing things. Some may want to work from home. Some may not have issues doing things more quickly while some may need a motivation boost. Finding the balance between each individual needs and needs of the company is truly not an easy thing to do.

Shirobako makes the characters of its own story make new stories within its own story. The original anime project from Shirobako’s anime studio, Musashino Animation, is called Exodus, while their other anime, the Third Aerial Girls Squad, is a (fictional) manga adaptation. That’s a lot of different layers and stories to create at once, and its really admirable stuff from P.A. Works.

Miyamori Aoi has that stressful role among the production staff. It’s a job at the anime industry, which is her dream, but at the same time, it’s a much less specific job compared to a voice actor, storywriter, animator or CG artist. This fits Miyamori, who doesn’t have that specific occupation goal in mind.

Her friend Ema Yasuhara always loved to draw and she works at the same company as an animator. Ema is not fully confident in her work and criticism causes her to lose motivation as well as focus. Gradually, she began leaving her comfort-zone more. I totally understand that feeling of never being good enough. I mean, just look at the quality of my blog posts.

When that creative block hits, changing your setting really does help, as suggested by her co-worker Iguchi. For example, playing a bit with my dogs always helps “refresh” my mind. Going out and simply watching the sky during dusk does wonders too. Or indeed, doing special routines on music. I may not do it the same way as Ema, but I often find myself jamming to anime openings and endings which never fails to help. Especially if its the Shirobako OP or ED, but more on that later.

One of the main five girls is Misa Toudou, who wants to do anime CG work. Despite working at a well paid CG company, she is unhappy because her tasks only involve making tyres, which doesn’t exactly align with her dreams of making anime CG, and well, I can relate. Here I’ll go about university once again, but my first semesters involve struggles with electrical engineering, mathematics, physics, digital circles… None of that really aligns with my goals and makes me wonder what exactly am I doing here. The thing I could take away from Misa’s story is that even if the experience seems useless, it could very well prove worthy one day when you don’t expect it.

Reading literature thanks to Shirobako

Imai Midori, or Diesel-san dreams of being an anime storywriter. She got closer to her dream due to her love for discovering and studying new things. As you would imagine, she is really into reading, and her love for Dostoyevsky literally makes people read Dostoyevsky. Or at least that was the case for me.

You see, I watched Shirobako for the first time during those chaotic times called high school finals. And yes, even that was better than the chaos of university exams.

Sakaki Shizuka is the voice actor among the five high school friends. She is hugely dedicated towards achieving her goals, no matter the hardships she is facing. Her character and her growth prove that persistence and dedication are worth it. Shizuka lacked confidence, which caused her to fail auditions. When she was given jobs, it hardly felt like she was going towards anything. Yet she never gave up, kept trying, and in the end, her efforts proved to be worthy. Seeing her finally get a role after an entire anime of difficulties made for one of my favorite scenes ever in all of anime. Rare are the moments that can make me cry so much purely out of happiness, and every time rewatching the scene its hard to stop the tears again.

Making matters even more emotional is Miyamori Aoi’s reaction, basically mirroring my own reactions. Ema has also volunteered to make the keyframes for the scene that is voiced by Shizuka. And in the process she cried too. All of her friends just wanted to see Shizuka do well, and these moments were a beautiful way to show the bond the girls have.

Shizuka’s story truly does make me feel that working hard for your goals will be worth it, no matter how impossible it may seem.

I’ve mentioned the five main girls. But Shirobako has a lot of characters. Going through all of them would really make this a long post. But let me just give some love to Erika Yano, Miyamori’s fellow production assistant. She really knows how to calm down and support a person when they are in a pinch. Yano radiates so much maturity and calmness. Calmness, when she isn’t talking to Tarou, at least.

Kinoshita Seiichi is the director and the funniest character of the series. His voice actor did a stunning job, and let me tell you that his voice really fits a comedic character. Kinoshita often procrastinates, and seeing Honda-san taking drastic measures just to make him finish his work made me feel lowkey called out. Not that I need to be put into a cell to finish a blog post, but there are moments when I just… procrastinate. Not just with blogging stuff but university stuff as well. Also those scenes when Kinoshita came to see the mangaka of the Third Aerial Girls Squad are just legendary.

Honda-san went from Production Assistant to a pastry chef. And I respect that decision so much. It shows its never too late to start pursuing your dreams. I could go on but I’ll just say the cast of supporting characters feels incredibly real. Both of Musashino’s anime felt like a true team effort that you just wanted to see do well because of all the hard work and love the characters have put into it.

One last thing. Andes Chucky. Those old generation scenes when Miyamori’s favorite anime was made. It felt so nostalgic and it put me into tears. Once again when Miyamori cried I did too. I don’t think any job that involves so many different people can go entirely smoothly without some kinds of issues or rushed things.

Just as the anime itself is inspiring and motivational, so is its OST.

The second opening sequence has the effect of a calming pill. It’s among those openings and endings that make me feel everything will be alright. And in that post I already told this story but I’m gonna do it again here.

It’s once again about exams. Those final high school ones from June last year. It was a very stressful time, and I watched Shirobako in that time period. The exhausted Miyamori shown in the sequence was basically me thanks to all the studying. The song involves the words “panic” and “pinch”, just making me relate to everything even more. This is the English translation of that part of the lyrics:

But I can’t lose.

My head is in a panic.

It was relatable, yet so calming at the same time. It filled me with all this optimism and made me feel it will work out well. No matter how many times I listen to that song or rewatch the sequence the effect stays the same. It never gets old.

Meanwhile, the second ending sequence had 6 different versions, each of them being dedicated to one of the five main girls, plus Miyamori’s two plushies. As the episodes went by, the five girls have been gathering on the final picture at the end of the sequence, just as they all gradually ended up working on the Third Aerial Girls Squad. I really love it when sequences slowly add new details or things that build-up to something.

Shirobako’s first ending sequence also does something like that. Mimuji and Roro, Miyamori’s two plushies are dancing through the sequence and every time at the end, Roro attempts to give Mimuji a love letter. Mimuji refused every time, but Roro never gave up, and in Episode 12 when he tried once again, Mimuji accepted his letter. In Shirobako, even the characters that are only alive in Miyamori’s imagination are trying their best.

Don’t give up on your dreams. Passion and dedication can go a long way. If you find yourself on what seems like a detour, it doesn’t have to mean the experience won’t prove worthy in the future. But even if you achieve your goals, after a while you’ll have to make new ones. I guess that’s just the nature of the goal-oriented human beings.

Maybe reaching your goals doesn’t end up feeling the way you expected. If that’s the case, think back to why you even wanted to reach the goal in the first place.

Shirobako takes a closer look into the workings of the anime industry. At the same time, it reminds us of the importance of dreams, ambitions and persistence. It reminds us how important it is to be surrounded by a group of people with similar attitudes and ambitions.

Would it be too much to say that it is a gift given to us by the anime gods that we are not worthy of having? I have so much love and appreciation for everything Shirobako, and I’m so grateful to P.A. Works for making it a thing. That Shirobako movie that they announced can’t come soon enough.

As always, please leave your thoughts on Shirobako in the comments. I would love to hear from you!

The Shirobako Blu-ray is available on Amazon.

Or maybe you want a Shirobako nendoroid or figurine? Amazon has one for Miyamori and Yasuhara.