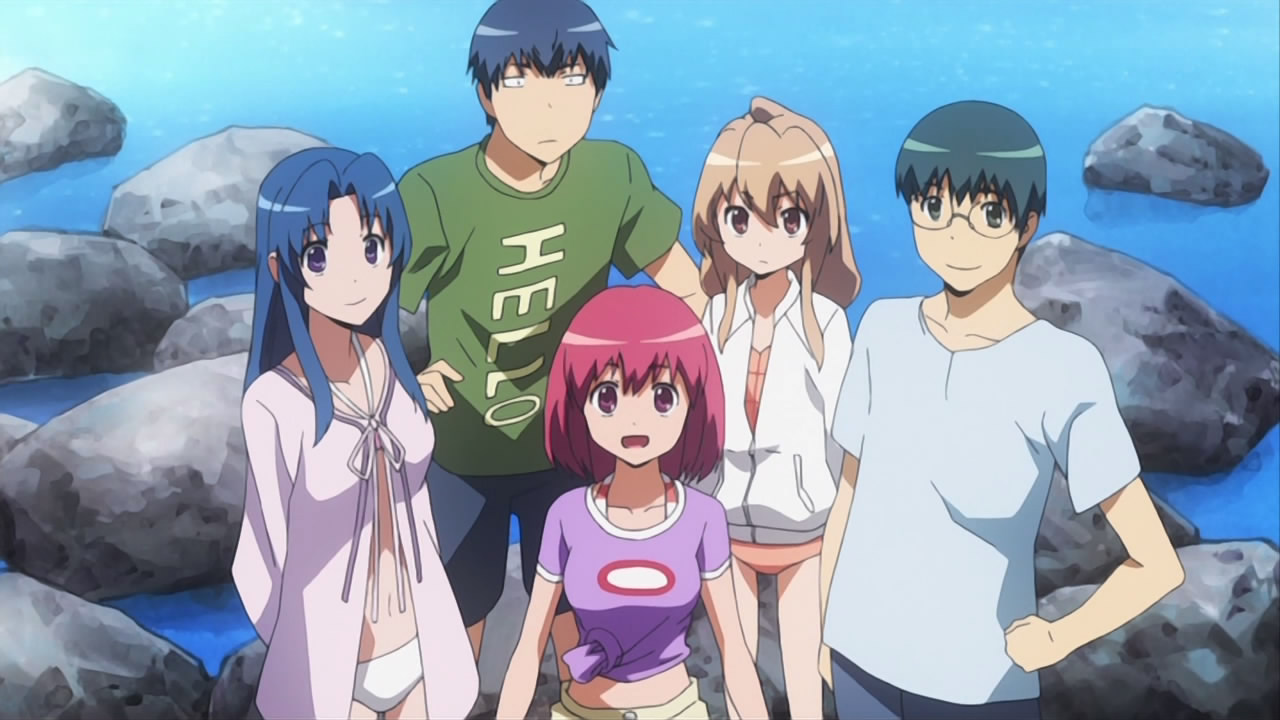 Another quarter of the Toradora rewatch is already done, which means its time for the new installment of Toradora December!

Here are my 5 favorite moments.

Ryuuji is mine! – Episode 8

Ryuuji ends up knocked down in the swimming pool. The person he sees helping him out is Taiga.

As he wakes up, Taiga breaks down emotionally, because no one noticed what has happened to Ryuuji. She screams “Ryuuji is mine!” and tells everyone to keep their hands off him.

Such a powerful scene. I think what happened speaks for itself. But what has made this scene even more powerful for me are the reactions from Minori and Kitamura. They understood everything, probably better than Ryuuji and Taiga themselves.

“He is my dog. I have an obligation to make sure he doesn’t misbehave at someone else’s house.”

Are you really sure that’s all there is to it, Taiga?

Ryuuji has a moment alone with Minori and uses it to ask her if she has a boyfriend.

Minori uses a ghost metaphor to express that she hasn’t experienced the feeling of love yet. Ryuuji continues in the metaphor narrative, saying he is interested in experiencing love. She tells Minori he hopes she will experience love one day, and he tells her he is sure there is someone that wants her to experience it.

By that someone he meant himself.Â  Minori ends up implying she may experience love someday.

From her facial expression and the mood of the scene, it seemed to me that she didn’t rule out falling in love with Ryuuji.

This was a scene full of subtlety that was hard to understand properly when I first watched this anime.

I really enjoyed this conversation between Minori and Ryuuji. Minori wondered why would Ryuuji want to scare her when she sees him as a person that wants to make everyone happy. This was a sweet moment cause it showed that people around you do notice your kindness. Seeing how Ryuuji is one of my favorite characters of all time, I just felt… happy for him.

Ryuuji replied that he wanted her to see a ghost. And when Minori told him they should go search for UFOs,Â  she gets excited while looking at the fireworks, celebrating that she saw “a UFO”. It seemed to be her way of saying she is starting to feel something towards Ryuuji.

All while Aisaka Taiga is seen with her head down, clearly not in a happy mood, with Kitamura looking at the fireworks. Is she starting to realize that things won’t work out with Kitamura?

Taiga receives phonecalls from her father but refuses to pick up the phone. She later realizes her bank account is empty. Clearly a way to be forced into talking with her father.

She sends Ryuuji to come talk with him instead. Her father reveals he wants taiga to come live with him again.
Ryuuji, who lived his entire life not knowing how it is to have a father, believes in his good intentions.

So when he walks home with Taiga and they spot the father’s car, he tries to make Taiga go with her father. She refuses to do it and they end up in a fight, till Ryuuji laments his father wont come back no matter what he does.

This was the moment he realized he wanted Taiga to get on better terms with his father because of his own family situation. But that made Taiga change her mind. She went with her father, for no reason other than Ryuuji.

She put her feelings aside and did something only because she saw how emotionally Ryuuji feels about the situation.Â

The episode ends with Ryuuji convincing himself that what has just happened is a good thing. Or is it?

It almost happened during the first moment mentioned in this article. But episode 13 is the first time during this year’s Toradora rewatch that I cried. And we are only half way through.

The first moment of the episode that made me cry was when Ryuuji and a Minori in tears were the only people who clapped to Taiga.

Then Taiga won the beauty contest and a race was held to determine who will end up dancing with her.

Ryuuji, who received a message from Taiga’s father about breaking his promise, fully realized the mistakes he has made. He was strongly determined to make up for it, and he was ready to do everything he can to win that race.

But an unexpected competitor in Minori had arisen.

Minori, who Ryuuji still hasn’t spoken to since their intense exchange of words related to Taiga’s father situation.

After she fell down, she hit two boys in front of her with a ball. She threw herself into 4 other boys at once. All to help Ryuuji win the race.

But Ryuuji helped her get up and they ended up crossing the finish line first together.

The emotion Minorin showed is probably what made me teary too. She knew she had a part of the blame too, by not telling anything to Ryuuji about Taiga’s father. She wanted to make up for it.

But it wasn’t only that. I feel like those tears while she was telling Ryuuji to go towards Taiga held a deeper meaning. And I feel that because of the “UFO” she was happy about in episode 10…

And that would be it for this set of episodes. Emotions are really heating up, as Christmas nears, both in real time and Toradora time. And not clicking that next button after each episode is getting impossibly hard…

Please tell me if I missed any of your favorite moments. I would love to talk with you about this masterpiece of an anime!

Also please check out the first part of Toradora December if you haven’t yet.