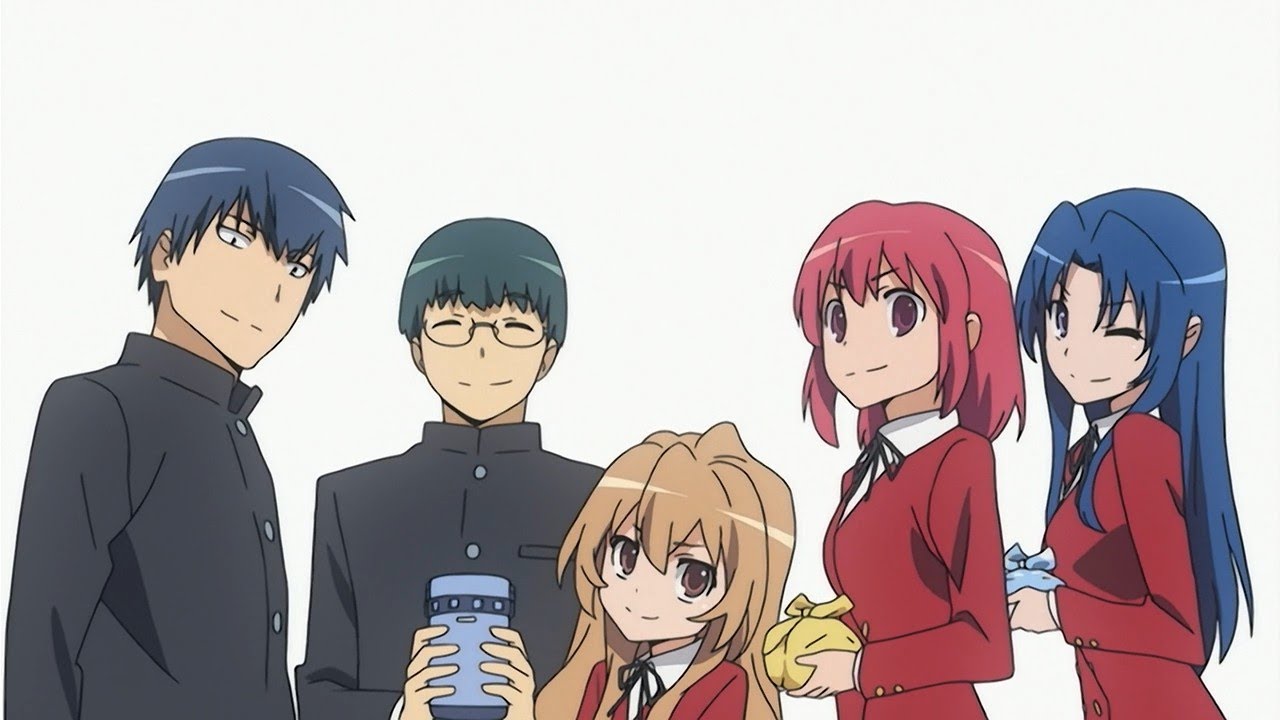 Before I start with part 3 of Toradora December, I want to wish a merry Christmas to everyone reading this! Thank you for taking the time of your day to read this post.

The third set of episodes involved superstitious rumours, elections for the student council and a Christmas party.

Let’s dive into it!

When Kitamura dyed his hair out of refusal to become the student council president, Ami Kawashima made some harsh comments on him.

And Minori understands why. She thinks highly of Ami’s words, due to her experience with the adult world.

Minori wants to believe that for this reason, Ami already understands everyone’s feelings.

She thinks of Ami as the group’s last hope.

Ryuuji calls Minorin kind, which she denies, describing herself as “phony”. Ryuuji didn’t seem to understand why she described herself like that.

But he did seem to agree that Ami knows more than the rest of the group.

Kitamura publicly confessed to Kanou. Her reaction was everything but an accepting one.

Taiga couldn’t help Kitamura with words. But she still wanted to do something for him, just like Kitamura helped her when she needed it.

“I don’t understand who is wrong and who isn’t. All I know is, I can’t stop moving forward!”

A fight follows. Taiga showing her great fighting skills yet again. Well, she did have a lot of practice over the course of the anime, didn’t she?

Ryuuji stopped her at the most critical moment.

She knows that Kitamura would follow her to America if he knew her true feelings. She doesn’t want him to do something like that only to be with her, so she decides to conceal her feelings. I think some of our main characters can relate to this “concealing your feelings” thing…

This is followed by an emotional Kitamura thanking Kanou.

Then as Nanako finds what seems to be Taiga’s student ID, Kihara spots a picture of Taiga and Kitamura.

“She really does love him”, she says, before Ami takes the ID, saying she’ll return it to Taiga.

Minori heard their conversation and as Ami and her friends walked by, she asked Minori if her feelings of guilt are gone.

Minori was shocked, but Ami clearly wasn’t happy with herself after that. Some interpret this moment as Ami making Minori realize that Taiga’s actions from this episode showed she still loves Kitamura. Which means Taiga wouldn’t be hurt if Ryuuji ended up with Minori, or perhaps Ami even.

Others believe this is simply Ami realizing Minori likes Ryuuji but won’t act on her feelings in order to not hurt Taiga. Whatever you may think it means, this scene was fantastically made. The red colors really compliment the mood well.

Oh and this was basically two scenes put under one. Picking just 5 is getting too hard so…

For episode 17, I could easily pick Taiga’s excitement over Christmas, simply due to how cute it is.

But the ending of this episode feels so impactful. Ryuuji feels confused.

His classmates are shipping Taiga and Kitamura. And despite actually aiming for that ship to happen, and working on making it happen, he doesn’t feel happy about the prospect of it actually happening.

When asked by Kihara if he thinks it would be good that Taiga and Kitamura go out, he replies “it would be too sudden”.

It’s the clearest sign so far of Ryuuji realizing how exactly he feels about Taiga.

The hidden meanings are what makes this scene even more special.

It’s heartbreaking enough to think that Taiga let her favorite Christmas decoration be used only to have it end up in pieces thank to her best friend Minori.

But think how Minori has been avoiding Ryuuji and doesn’t want to come to the Christmas party.

Why doesn’t she want to come to the party? To not hurt Taiga.

And when she does come near something that is related to the Christmas party, she breaks Taiga’s star. You could also think of the star as Taiga’s heart.

Minori was determined to be the only person to fix the star. She especially did not want Ryuuji to help her fixing it.

She cries while saying “Takasu-kun”. It’s like she wants to tell him everything but decides not to.

So much moments I could write about. Kitamura’s Christmas outfit always makes me laugh.

Oh my, that performance. Holy night from Toradora is my favorite Christmas song ever.

But when Taiga was visited by santa. Seeing how happy it made her brought such a smile to my face. So much cuteness. So heartwarming.

She realized this was Ryuuji. He was soon sent back to the Christmas party. Taiga’s Christmas present to Ryuuji was Minori’s arrival at the party.

And while he was on his way, he missed out on what has to be one of the most emotional moments in Toradora. Taiga’s emotional outburst.

She was sure Minori will come to the party and fall for Ryuuji. She was sure this will mean she won’t be by Ryuuji’s side anymore.

And she was sure that this was not what she wanted. So she ran outside and screamed Ryuuji’s name in tears.

Which was seen by Minori. This made it clear to her that she should not act on her feelings towards Ryuuji if she doesn’t want to hurt Taiga. Not that she wasn’t aware of this before.

Soon after, Minori meets Ryuuji. She tells him that she has decided she shouldn’t see ghosts, and that it would be better if she doesn’t see them.

Ryuuji thinks of it as a rejection. Which in a way it is. But Minori does share the same feelings Ryuuji has towards her. She has just decided it’s best not to act on them.

Once again, I hope you’re having a great Christmas time! Is episode 19 one of your favorite Christmas episodes in anime? Are you also watching Toradora this Christmas? Let me know in the comments 🙂

Check out part 1 and part 2 of Toradora December if you haven’t already!