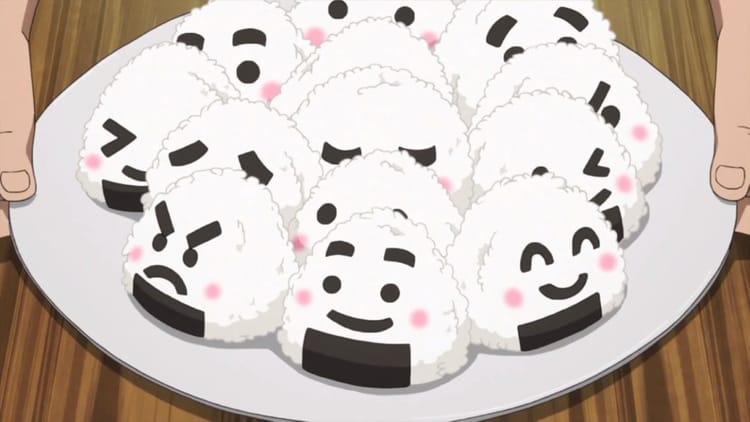 The first post from this mini “series” that I never actually thought of as a series but maybe really is a series was about cakes. Toradora cakes to be specific.

Then in this post I shared with you some of the drawings I was making for school. Now we are talking about cooking once again and this time its not a dessert.

Onigiri, or rice balls are a simple Japanese food often used as breakfast or in bentos. They are essentially a triangle-shaped ball of rice filled with stuffings.

Usually they are decorated with some nori paper and seeds on top.

I’ve seen them across various anime. Most notably, I can recall Aisaka Taiga making onigiri during the Toradora OVA episode, and Hinata Miyake wearing a T-shirt with an onigiri on it.

While I’m not sure how well Hinata Miyake prepares her onigiri, I remember Aisaka Taiga made them too salty.

Was I able to do better?

Unlike the cake post, this time I actually have a picture.

I actually already tried making onigiri once. It was another one of my “home alone cooking experiements”. I tried doing it with the common rice you can buy in Croatia, and not the sushi rice that is required.

That time I also didn’t have the nori paper, so it lacked the look as well as the taste. And it didn’t really hold together so I ate most of it with the jaw.

But this time I came ready. I had the nori paper, I had the sushi rice. I had the tuna and mayo, one of the most common stuffings.

This was my day for making proper onigiri.

After cooking the rice exactly as it was written, waiting for it to start boiling, then lowering the temperature and leaving closed for 15 minutes…

…a lot of it was left sticking at the bottom of the pot. It left me wondering where did it go wrong. The amount of water was fine as well as timing so really, what was the problem?

My mother said it could be because of the plate. I guess we’ll just leave it at that.

In any case, the rice really tasted great. Its a better rice than the one I usually eat here. Just a shame that it costs significantly more than the “standard” one for these areas.

While the rice was cooking, I mixed the tuna with mayo, chopped a carrot, took out the cheese and “cropped” the nori paper into smaller bits.

An important thing to note is that before using the rice to shape the onigiri, you have to dampen your hands with salted water. Otherwise you are going to get a lot of the rice sticking on your hands.

I didn’t do this the last time, because back then I used a plastic wrap while shaping the rice, which you can also do if you don’t want to shape the rice with your hands directly.

Most of my onigiri were tuna-mayo filled. Once you get your shape, you place a small bit of the nori paper, for decoration but it also works nicely for holding the onigiri.

The nori is an edible part too ofcourse. It has quite a specific flavour but I can’t say I didn’t like it.

500 grams of the rice was enough for 7 onigiri. At the end, I put some flax seeds on them. Usually you would put sesame seeds but I didn’t have those this time.

That was fine and everything but where is the picture? How did it end up looking? Was it worth it? Was it tasty?

There they are. My first ever proper onigiri. Not all of them have that shape but I think it was a good attempt. Would, and will definitely do again. This time with sesame seeds and maybe wasabi because why not?

I already mentioned how the rice was great and the nori had a specific but good taste. Nothing to complain about the fillings either, cause I really love tuna and mayo.

But what I could add is that these things fill up your belly quicker than expected. 2 or 3 are more than enough as a meal after a soup.

Now I’d really like to try making them with more fillings, preferably Japanese specific. Or maybe next time I could try my hand at sushi. I did also buy those sushi rollers afterall.

If all of this made you want to buy some onigiri related stuff, you can do that on Amazon!