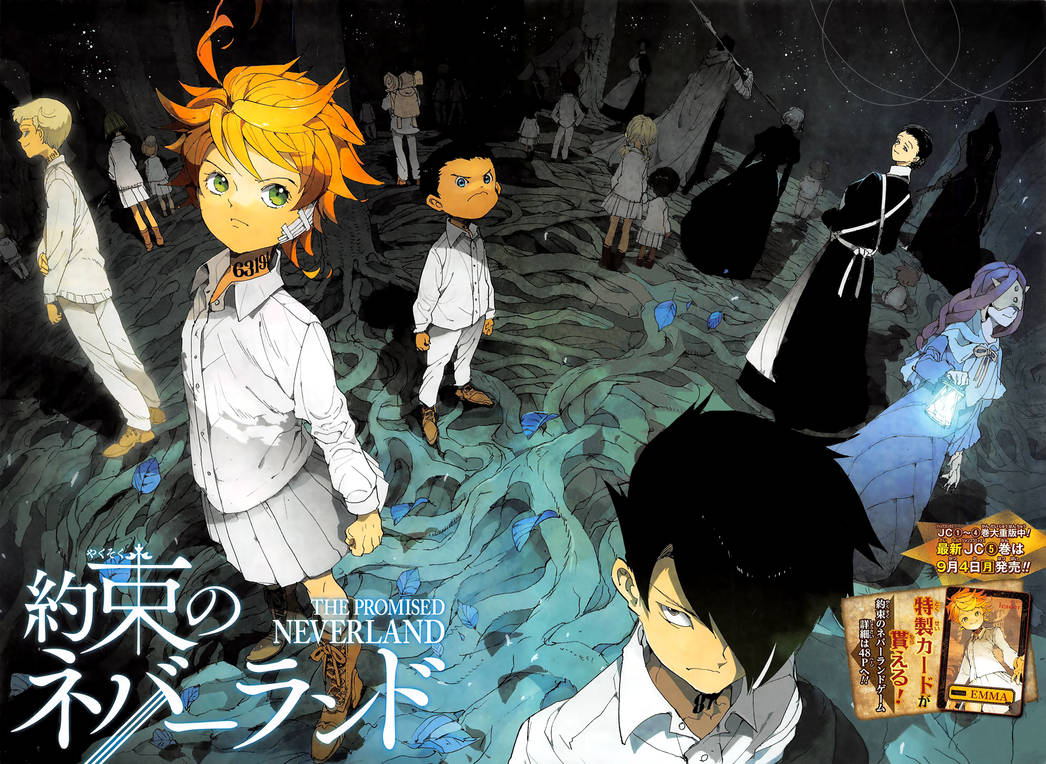 During the Winter 2019 anime season we’ve been treated by the fantastic anime adaptation of The Promised Neverland.

It had one big problem tho – it ended.

Usually you would start collecting or reviewing a manga series from the very first volume. But my curiosity got the better of me and I’ve started reading The Promised Neverland from the fifth volume onwards.

I do plan to collect the first four volumes. But it’s gonna happen a bit later I guess.

With this in mind, the title of Volume 5 – Escape is fitting. Not only because the children have escaped Grace Field but also because the volume marks my Escape from being an anime-only follower of The Promised Neverland… 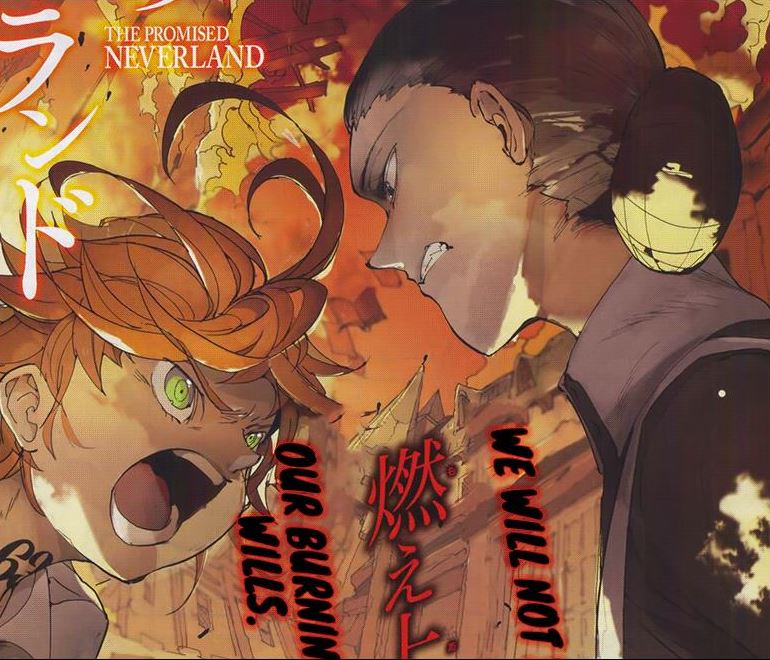 However, not all chapters from Volume 5 are content not adapted in the anime.

The first 3 chapters, titled ‘Action, Part 4 & 5’ and ‘Escape’, cover the events of the final episode of the anime’s first season.

And the anime has changed some things from those chapters. Nothing that changes the plot but just a few details and shortened parts.

For example, after Ray takes the scared Jemima to cross the cliff with her, there is some nice internal monologue that expands on his newly found motivation to survive along with all the other kids.

Basically if you are not sure what Ray meant when saying “I lose, Norman”, the skipped monologue expands on it.

The biggest changes, however, are related to Isabella.

And this is something the anime both improved on and took away from.

The anime did a fantastic job with her pursuit of the children and attempt to catch them before they managed to escape. While watching the episode, I was genuinely so scared for the children, hoping she won’t catch up on time.

And when she saw Emma face-to-face for the last time, I really thought she will try to cut off her rope or do something else to prevent her escape.

These scenes didn’t felt as tense in the manga, altho that could be in huge part due to the fact that I already knew what was going to happen.

Another thing is the aftermath of the escape. The anime Isabella puts her hair down, unlike her version in the manga. But more importantly, again there is skipped monologue.

While watching the episode, I couldn’t feel much sympathy for Isabella after her defeat. But I actually kind of felt for her in the manga. The manga made her love for the children feel more convincing than it ever did in the anime.

She disposed of the ropes used in the escape to give the higher-ups a harder time in searching the children. The anime made this so subtle that I didn’t actually fully realize that it was Isabella’s way of helping the children.

Isabella calling the orphans “my dear children” actually always annoyed me. I thought that, if they are so dear to her, she could try and help them in some way. But her send-off in the manga actually made me “forgive” her for everything. 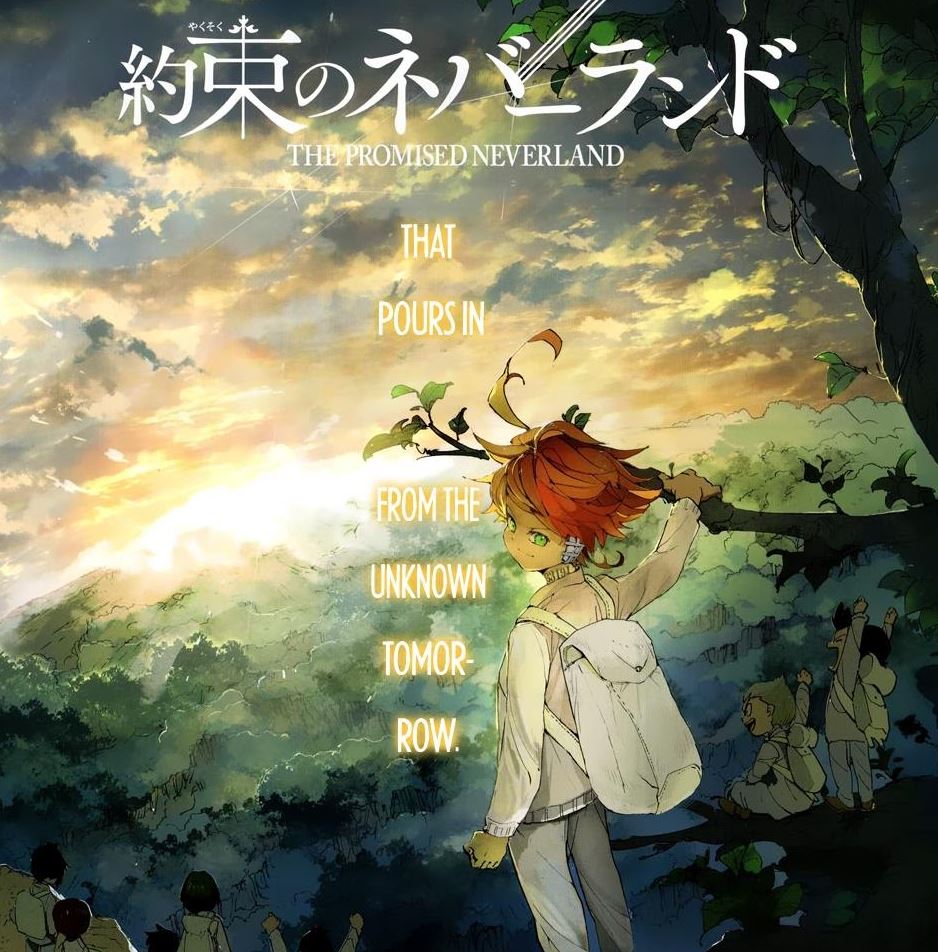 The children of Grace Field may have gotten their freedom, but there is no time to celebrate as its only the start of a long battle.

Quickly they start facing the challenges provided not only by their pursuers but nature itself. This is one aspect I really enjoy – there are new plants and species that the children never read about in their books.

At least not scientific books…

The children were caught in a trap but fortunately they still have a mystery ally in William Minerva who left them clues through books and certain other items.

One of Minerva’s fantasy books served as a way to survive the trap they fell in. I just do hope not everything will be solved by reading from the books. Not that I want the children to struggle, I want them to live the life they deserve. But I really enjoyed the mind games and planning in The Promised Neverland so far and I hope to see more of it.

Which speaking of, I miss Norman. But somehow I’m still sure his “imaginary” appearances next to Ray and Emma won’t be the last we’ll see of him. He is the main character after all. And we are still yet to see what exactly happened when he got shipped.

But back to Minerva. This is just me throwing ideas but how can we actually be sure his intentions are good? One thing that was prominent about The Promised Neverland was that you never exactly knew who you could trust.

It’s kind of scary to think of. The children have all these clues. And the pen that gave them a place to go towards.

They have the hope and belief that things will soon get better. But what if they are being lured into a trap without being aware of it?

Maybe I should stop being so negative. 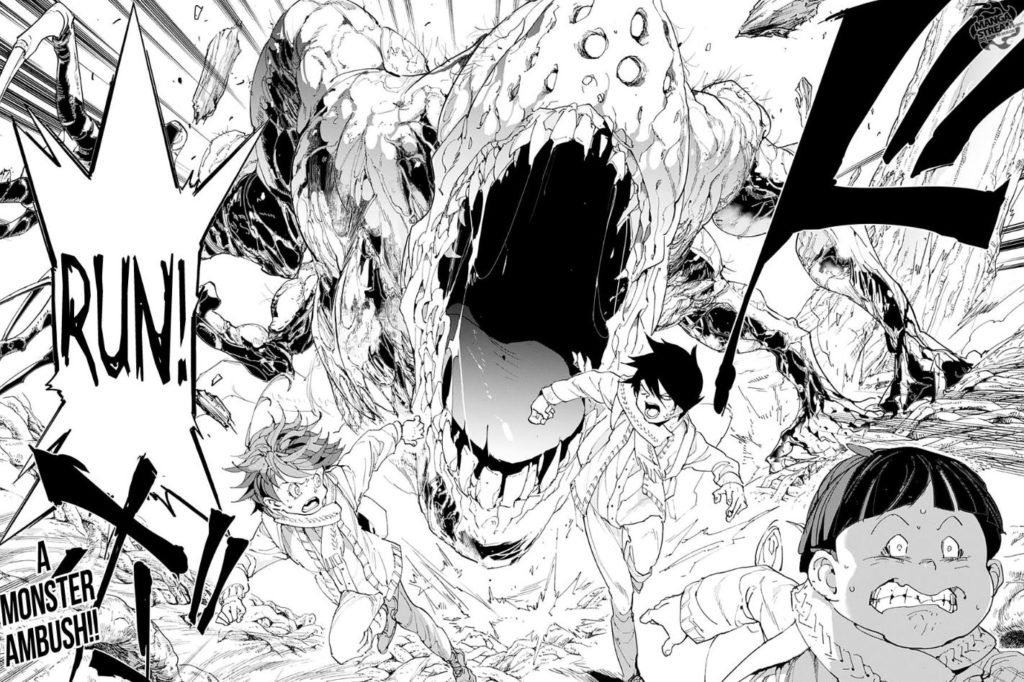 Poor Emma and Ray. Faced with those scary demons once again. To kind of make things even worse, it seems these are “wild” demons. They seem to be a normal natural occurence in this world. What a scary world it is.

There is only so much energy they have to run away from the pursuing demon. Something had to be done quickly. And Ray decided to use the earlier experiences to trap the demon.

This meant he had to separate from the group. But this time he won’t try to make himself a sacrifice. He would get the job done and come back to the group, determined to survive along them.

His plan seemed to work. But wait didn’t it work a bit too well? The demon got decapitated. The “tame” demons appear. Or should I say, pursuers.

Ray has a moment of insecurity. What can he possibly do now?

He carves a note, lies that he is the sole remaining child and runs away in a different direction to the other kids. No matter how incredible his stamina is, surely just running away won’t be enough to save himself.

All in all, it’s a fantastic manga and I’m more than glad I started reading it.

It also includes side-stories, one after each chapter. My favorite was when Emma got a haircut, and Isabella was careful not to cut off her distinctive wisp.

These side-stories, however, are just serving as a lighthearted relief between the dramatic events that are going on.

How will Ray escape from this situation? Will the other children turn back in order to find Ray?

I can’t wait to find out in the next volumes. Soon I’ll have my hands on the next 4 volumes of The Promised Neverland. Look forward to the next manga review once they arrive.