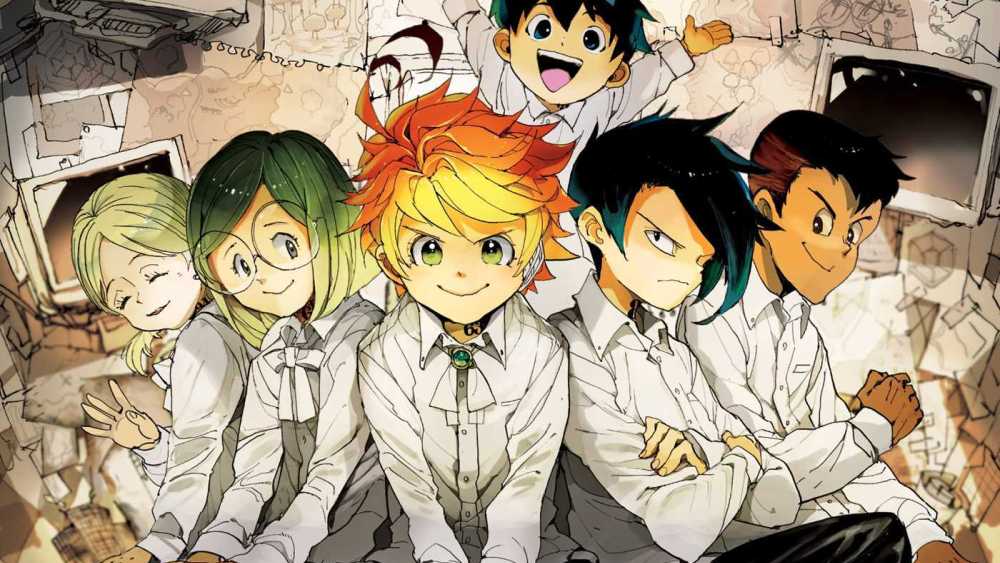 The children of Grace Field have finally reached the B06-32 which turned out to be a human shelter.

Is the man awaiting for them William Minerva?

I expressed my doubts about it in my Volume 6 post and it turns out I was right.

The mysterious man in the human shelter is not William Minerva. But it turns out he also has a past of escaping human farms.

But unlike the Grace Field group, his siblings didn’t survive the escape. This man was the only remaining survivor. And he stayed in the human shelter, where he seemingly lived for 13 years now.

Seeing the Grace Field children only gave him negative emotions. This even led him to try shooting Emma, but luckily for the orphans some of his past traumas still seem to haunt him.

I keep referring to him simply as “man” because he refuses to give the children his name. He doesn’t want to have anything to do with the children and just wants to see them leave.

You can hardly call him a likeable character. But I guess that’s how you would end up being if you live in a hideout for 13 years as the only survivor left from your family.

And to add to that, it looks like some of his decisions were to blame for the events.

I won’t defend someone that basically wants to kill an entire group of children because of his past traumas, but I can’t say its surprising that he behaves that way.

A place to live

The B06-32 human shelter is a surprisingly good place to live in.

Apparantly the food supplies are limited, but I do wonder how is the food still edible after at least 13 years now.

Sure there is also a garden but there are also things like cookies and premade soup. Surely there is no way to refill those supplies or is there?

The shelter has a bathtub and hot water too. I can imagine it would be a great feeling to use that after a week without hot water.

Ofcourse, Ray and Emma were using their time at the shelter efficiently. But the books they found were outtdated.

There was a new letter from Minerva tho. It leads them to another point, this time A08-63.

How many more checkpoints are there going to be until they finally meet Minerva?

The unnamed man was tied and locked by the children but he managed to find a way out, and he planned to kill the group with a knife.

Until Emma cornered him into making a deal with the group.

Luckily, they found an emergency detonator. Unless the man wants his shelter to be blown off, he has no choice but to go with their deal.

He accepted but before leaving they went to a secret armory to grab some weapons.

To be as light as possible, Ray took one gun and Emma took a pistol along with her bow and arrows.

In order to reach the destination in the shortest time possible, Ray, Emma and the unnamed guide have to cross a forest full of wild man eaters.

Emma wasn’t catious enough and had a really close encounter with one of the demons.

When it was time to shoot, she hesitated, but their guide shot the demon instead.

This part left me confused. For a second I thought someone really just got killed there. But looking at it now, it was probably just a flashback from the unnamed guide.

While shooting the demon may have looked like a favour, it turned out to have the opposite effect. The man didn’t kill the man-eater.

Instead he waited purposely for it to regenerate and call its “allies”. Suddenly a whole bunch of scary man-eaters appeared.

Surely two children who never used guns before will have a tough time handling this.

A fantastic buildup for what’s to come. We are in for a threat.

Not only do the children have to face demons but their “guide” isn’t exactly a thrustworthy person. He intends to kill at least one of the two.

Gilda took the initiative once again. Her development recently is clear. Good for the group, because they cannot always rely on Ray and Emma.

Doesn’t it resemble Norman’s outfit from Episode 10? I can’t help but wonderâ€¦

Damn it really looks the sameâ€¦

In any case I’m off to Volume 8. Things are really gonna get exciting now 😀

As always, leave your thoughts on this Volume of The Promised Neverland in the comments below. And if you want to read my previous two Volume reviews, Volume 5 is here, and Volume 6 here.

The Promised Neverland Volume 7 and more is on Bookdepository.

You can also search The Promised Neverland on Amazon where you can find the volumes along other merchandise.