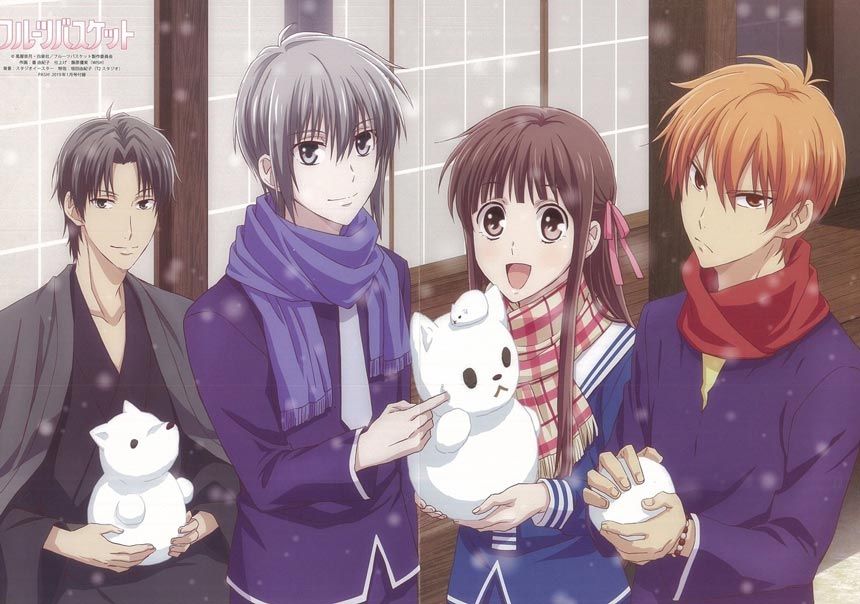 Happy holidays to everyone reading this! It’s time for my take on the best anime of 2019. This will be a top list, but not in your usual countdown way. I’m gonna make things a bit easier for myself… Maybe?

First I’m going to decide on my top 3 anime from each of the four seasons. These three picks from each season won’t be in any particular order. Then I’ll take all my picks, which should be 12 in total, and try to arrange them into a top list. After that I’ll make separate lists for sequels and non-sequels. Those separate lists could have any length, depending on how many of each I’ve actually included in the “final” top 12 list.

The first pick for Winter 2019 will be Kaguya-sama! There was never any doubt about picking this one. Kaguya-sama provided us with a lot of fun, cuteness, sweet moments and emotional moments. I can’t imagine season 2 being much different.

Breakdown of the ending sequence.

The first of the sequels. I haven’t actually watched this while it aired, since I only started Mob Psycho in the summer, but for sure this deserves to be among the top 12 best anime of the year. The high point was probably Reigen’s arc and ofcourse, I can’t go without a mention of the beautiful animation this anime had.

The Promised Neverland is another easy pick. Every episode was intriguing watching these children come up with a way to escape their situation. It got me interested to the point where I’ve bought (almost) all the existing English manga releases and pre-ordered the upcoming one! I’m looking forward to watching season 2 from the perspective of a manga reader.

Fruits Basket impacted me in ways that perhaps only one other anime I’ll mention in this post can compare to. I don’t know how it managed to do it, but it gave me a hard “try not to cry” challenge as early as episode 5, and already in episode 7 I gave in to the tears. I’m making it sound like it’s an anime with the only purpose to make you cry, but it’s so much more than that. There is an emotional backstory and development for pretty much all of the characters. There is a big emphasis on accepting yourself. The OST is incredible. Fruits Basket is one of the anime that made my year and I’m so grateful we have the opportunity to see the entire story adapted.

Similarly to Mob Psycho II, I haven’t actually watched this while it aired, but in the summer instead. Attack on Titan hasn’t gotten me hooked since the very start, but once it did, it was really hard to stop. Afterall, season 2 did become the first season of anything that I watched entirely in a single day. Once I reached the basement reveal, it took me a bit of time to really gather everything I binge-watched and realize what all this means. But when I decided to catch up on all the manga chapters, I realized just how incredible Attack on Titan is. It’s another instance where I’ll be watching the new season as a manga reader and it’s gonna be great.

This could be considered controversial but… One Punch Season 2 was fine? I’m writing this as an anime only, and it’s another series that I haven’t seen at the time of airing but in the summer instead. So I actually jumped into season 2 directly after season 1 and I still think it’s… fine? Sure, absolutely the production was better in season 1 but scrolling the communities and seeing season 2 described as “horrible”, “nightmare”, “worst thing ever” and what not, just doesn’t make sense to me. Maybe I’m just easily pleased. Maybe people’s expectations for this were just too high thanks to season 1… But I honestly had a good time watching season 2 of One Punch Man. To me, this is an example of how overly mean the community can be if something goes slightly against their expectations. I’m not saying it’s a 10/10 season, but come on, it could had been so much worse.

Araburu Kisetsu handles the topics of sexuality and young love. It’s unusual in how it directly deals with “that thing” aka sex. I mean, it involves a girl who spends the entirety of the series trying to get her professor to do things with her in that context. It’s a story about five girls so that automatically means I’d be interested. And huge bonus points for lesbian representation.

Not only has Dr. Stone been highly entertaining with loads of funny moments, it also delivered with the “feels” moments. I did not expect to be crying when Suika first got her “glasses” or when Senkuu first turned on a lamp, but I did, and I can only praise the anime for that. Dr. Stone made me more appreciative of technology and just how far humanity has gone with science. I could call this anime one of my most positive surprises of the year.

Speaking of positive surprises, how about Kanata no Astra? There seemed to be so much care put into this anime, with two 48-minute episodes and a cool usage of aspect ratios. The story kept on delivering, with new twists pretty much every episode. I was never really certain what is going to happen next. The characters grew to be such a likeable bunch as well. I was really happy to see their happy ending.

This is the “other” anime I mentioned while talking about Fruits Basket. I watched the first two seasons in the summer, and it left me with this huge motivational boost. I saw a bit of myself in Chihaya’s extreme determination to reach her (niche) goals, to the point where she is kinda oblivious of other things. But other than my love for her character, it turns out karuta is actually fascinating, and the other characters are made in a way that you can’t help but want them to do well. Every match has its own way of tension, its own story, every character has their own reasons to do well and their own reasons they are pursuing karuta. Chihayafuru is simply one of those anime that manage to do everything right for me. Every episode I find myself smiling and it’s not just because of the funny moments, of which there is plenty.

What drew me to this anime is the open-mindedness. The way they handled a non-binary character is phenomenal. It’s so important to have such characters in a time when they are still a rarity. Other than that, Hoshiai no Sora deals deeply with family issues. Ofcourse, it’s also a sports anime and the matches are enjoyable. I’m just kind of worried with how they are going to wrap things up in a single episode, unless a new season is planned, which I’d be more than happy to watch.

Asuna finally dives into the Underworld! I’ve been patiently waiting for that moment for 6 weeks, since she first agreed to enter in episode 3 and then finally appeared in the Underworld in episode 9. Those 6 weeks were filled with some great battles however, especially when we first saw Integrity knight Scheta in action. Now when Asuna is inside, all the other side characters from earlier seasons are about to join, and I’m mostly hyped for the comeback of Sinon. Altho that will probably have to wait for the next cour after a full season’s break…

And now it’s time for the long-awaited, most anticipated moment of 2019.

But before I rank the 12 picks, I’m gonna try and decide which season of anime was the best this year. Roughly looking through just the picks I made in this post, it would be Summer or even Fall. Although in my Fall preview I wrote that other than the sequels, it’s a disappointing season, anime like Hoshiai no Sora, Beastars, or even Shinchou Yuusha and Houkago Saikoro Club changed my mind. It’s really close between Summer and Fall, but ultimately, I think Summer 2019 would be slightly ahead.

The reason is that in the summer, there was a point when at the same time, I had weekly episodes of anime like Fruits Basket, Araburu Kisetsu, Dr. Stone, Kanata no Astra, Fire Force (when I still had interest for it), Machikado Mazoku, Nakanohito Genome. Most of them were at the end of the week, so if I couldn’t watch them one by one, I’d watch four of these anime on a Saturday. It was just a great bunch going on at the same time and I was sad when it couldn’t continue that way. That’s why, Summer 2019 takes the win.

And so, with the best season decided, it’s time for the ranking(s).

Feel free to let me know how you feel about my picks in the comments!